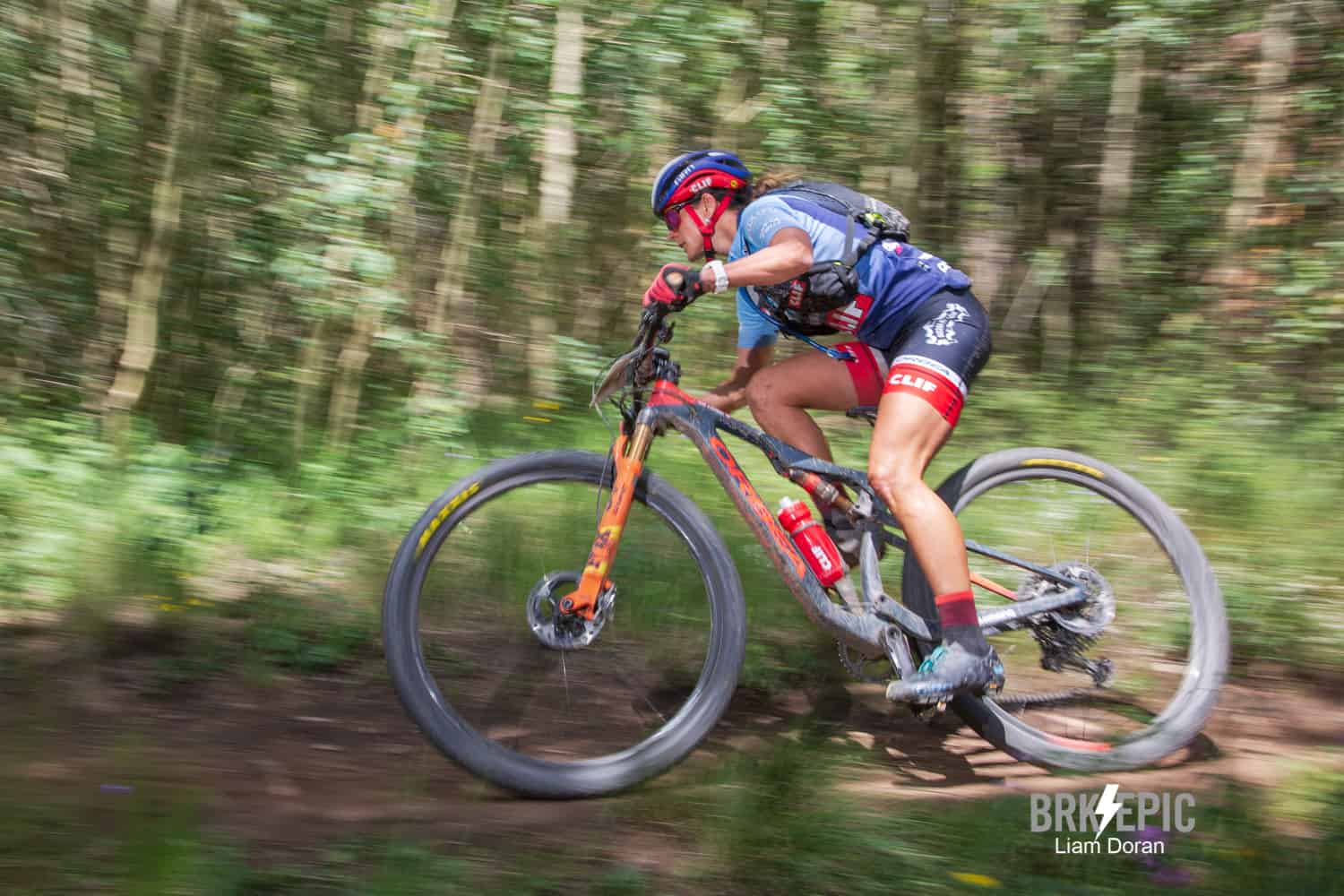 GC TAKEAWAY: Halfway through the Colorado Trail stage Monday, it appeared Katerina Nash was cementing herself as untouchable. She led Hannah Finchamp by more than two minutes, a gap that had grown steadily since the morning’s sunny start in downtown Breckenridge. But Finchamp, who, at 23, is 18 years younger than the three-time Olympian Nash, slowly started reeling in her Clif Pro teammate. By the time they finished, Finchamp had only lost 24 seconds on the day and likely saved any hope she has of upsetting the favorite later this week. She’s 3 minutes, 3 seconds down.

“I know Katerina is an incredible descender, one of the best in the world. So if I want to be close to her, I know I have to bury myself on the climbs, which is what I did today,” Finchamp said. Nash, meanwhile, took the day in stride. “You’ve got to think about the six-day race,” she said. “I rode my pace. But it was getting long at the end — I was losing a little mojo. I was happy to see the finish.”

Keegan Swenson had no such issues. The Stan’s/Pivot rider and reigning XC national champion won his second straight stage comfortably ahead of Russell Finsterwald and Ryan Standish, Swenson’s roommate in Heber City, Utah. Swenson bided his time until the last climb, when he opened a gap and took 1 minute, 43 seconds by the finish—despite a wayward dog nipping at his heels en route. He now leads by 4 minutes, 26 seconds. “Keegan has definitely shown that he’s the strongest guy here,” Finsterwald said. Luis Mejia of Colombia, who took third yesterday, overcame an early flat tire to catch Swenson late in the stage, then flatted again. He lost 16 minutes. Standish moved into third overall.

EVEN PROS CRASH: The most entertaining chatter after the race centered on a surprising number of crashes by top competitors.

“Dude, I went down like a bag of rocks,” said Standish, who nicked a tree stump with two miles to go. “Over the bars, instantly.”

“I took a wrong line and wheelied into a tree,” said Nash.

Cory Wallace, the reigning 24-hour world champion who sits in 11th place overall, clipped a pedal and flew off the trail. “You just kind of lay there, like, is anything broken? My wheel was still kind of crooked for the last descent.”

Stephan Davoust, arguably the best downhiller in the field, had his arm wrapped in a bandage from his own bar-twisting wreck. “I had to hike down to get my bike in the bushes, then take 10 seconds to make sure my body was OK and orient myself,” he said. “It was one of those where you don’t really know how or what happened.”

BEST THING WE SAW TODAY: Speaking of crashes, among the bloodied knees and shins and elbows was a bloody face. Tim Peeters, a 43-year-old online strategist from Leuven, Belgium, caught his bar on a tree and soared 10 feet downhill into a ditch while riding the ZL Trail. “You know how time slows down in an accident?” he said. “I saw all these sharp rocks coming at me head first, and I was like, I’m gonna break my face.”

He escaped major injury but laid there with his bike on top of him until Jeff Carter, an internal medicine doctor from Boulder, hiked down to help. Carter picked up the bike and got them both back on the trail. When they met again at the finish, Peeters thanked Carter once more. “No problem, man,” said Carter. “I’m just out here braaping it up, getting my suburban dad on.”

Peeters didn’t seem to mind all his red leaks. Or even notice them. “Without a doubt,” he beamed, “today was the best day of riding of my life. I remember seeing one of the race videos last year and a guy from Ecuador said, “This is like Disneyland! That’s what I felt like today.”

Make sure to tag @BreckEpic to share your stories with us.